What are the most ridiculous Halloween costumes for sale? 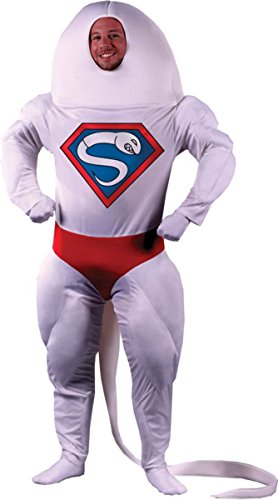 Why wear a boring costume if you can look ridiculous?
Why look “normal” as a boring vampire or boring witch if you can look absolutely ridiculous as a giant penis or outhouse?
Stand out in the crowd of vampires, zombies, and witches by wearing a ridiculous Halloween costume!
Everybody will be laughing at you and with you!

I absolutely love ridiculous and funny Halloween costumes!!
They are the best!!

Be bold!!
Be funny!
Be shocking!

Wear the most ridiculous Halloween costumes this year!!
I guarantee you will totally stand out in the crowd wearing a stupid Halloween costume!
If you are too shy, but still would love to wear a hilarious outfit this year, choose a funny costume that covers your face!

My favorite ridiculous Halloween costumes are displayed on this page!

This Super Sperm costume is one of the most ridiculous Halloween outfits for men ever!
*Ok guys!!
Who has the courage to dress as a super sperm next Halloween?
I dare you……
If you have balls, wear a super sperm Halloween costume!!
(Watch out for the super egg……)

Absolutely hilarious!
I hope you have fun at your party!

I hope you enjoy my ridiculous selections on this page and have a good laugh!
See you next Halloween!
Have fun! 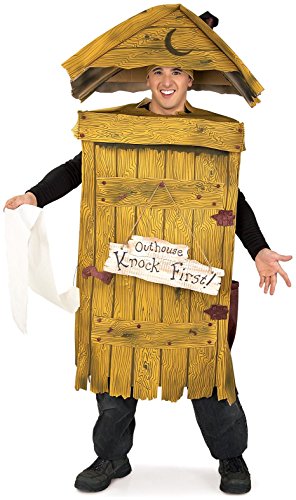 This hilarious adult ‘outhouse’ costume is definitely among the most ridiculous Halloween costumes for men (or brave women) being sold!
Hahahahahaha!
It’s perfect for someone with an ‘urgency’ to go…
(Just pray nobody has ‘to go’ on you though….
I love it!!
Just imagine how ridiculous you are going to look among all those monsters, vampires and witches!
Hahahahaha! 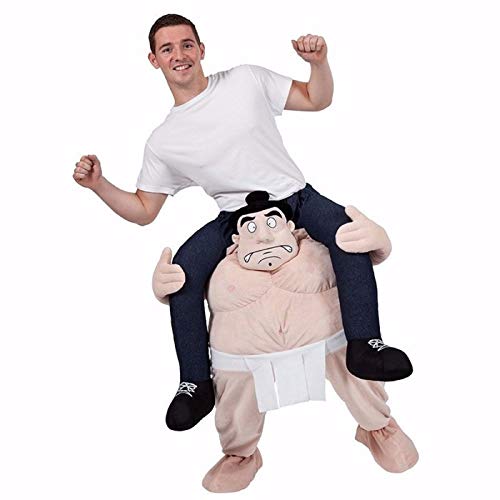 Novelty Ride On me Sumo Costume

This ‘Sumo’ ride on men’s costume has got to be one of the most ridiculous Halloween costumes for men out there! It’s absolutely hilarious!
Choose from many other styles and have a blast!

Don’t Want to Grow Up Ridiculous Halloween Costume for Men!

Don’t Want to Grow Up Costume

But Mommy, I Don’t Wanna Grow Up (X-Large)

*Sometimes you just want to feel like a baby again…
When the urge strikes…..
Wear a Baby on Mommy’s back costume!!
(Don’t forget your bottle…..)

This ridiculous Baby on Mommy’s back Halloween costumes is one of the most popular funny Halloween costumes being sold!
It’s absolutely hilarious!
Perfect for all the ‘momma’s boys’ out there!
Now you can let your ‘baby’ side come out! 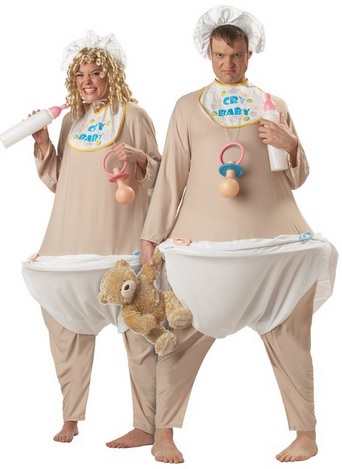 Who wants to dress in a ridiculous adult baby costume, diapers and all?
This is your chance!

Now you and your husband can both be big babies next Halloween!
Just wear this ridiculous couples baby costume!
(I truly hope you guys won’t need any diaper changing……)

Do you want to look extremely ridiculous next Halloween?
Then I strongly suggest you wear this hilarious inflatable hippo costume!! 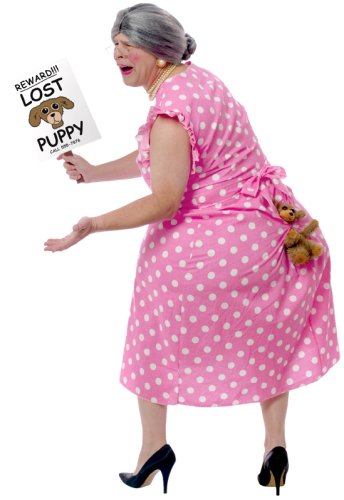 Hahahahahahaha!!!
This is one of the most hilarious costumes so far!!!

Who has the courage to wear this ridiculous outfit?
At least you don’t have to worry about “shrinking” your stomach….

Help the old lady find her lost dog!
This is the most hilarious and ridiculous Halloween costume for men being sold in my opinion!
Will have everyone laughing!
It includes a stuffed bodysuit, pink and white polka dot dress with attached stuffed dog and Lost Dog sign.
Enjoy! 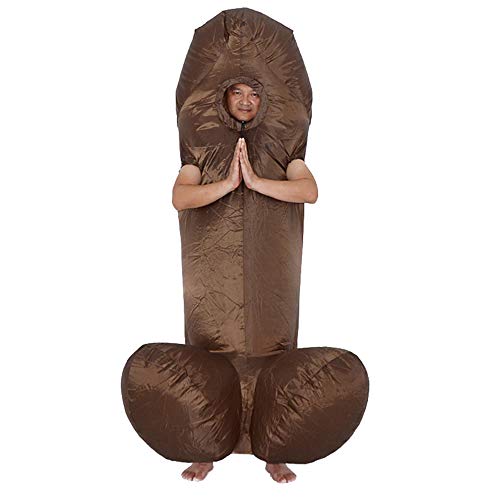 When all else fails… be a dick!

Who wants to be a giant penis?
Well… If you are proud of it…. Why not?
No more additional comments…..

All I can say is: if you are a d….ck head.. then dress the part!
You can join the super sperm over there…

Wear a ‘happy’ penis costume next Halloween and show everyone you are proud to be a man!

*I am assuming you are a man who wants to be a d…ck… But women are also welcome to become a huge penis for the night! 🙂

Genie in the Lamp: Ridiculous Halloween Costume for Men! 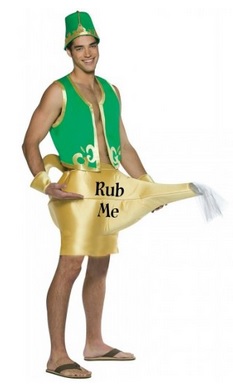 Genie in the Lamp Ridiculous Costume for Men

Genie in the Lamp Adult Costume 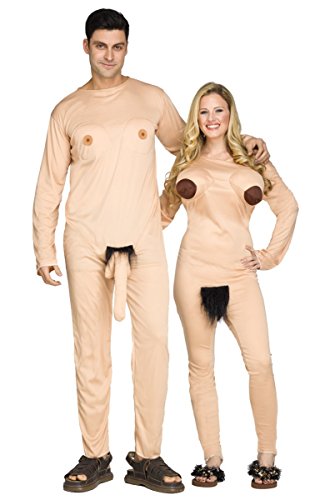 I guess this ridiculous Halloween costume for guys is pretty self-explanatory….
It’s a pencil!

(I hope he doesn’t need any sharpening though…)

The Most Hilarious Halloween Costume!! 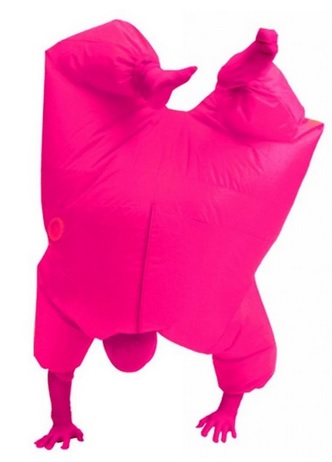 This is one of the most hilarious costumes ever!
It is a giant inflatable jumpsuit for adults in all colors!!
I love it!
Will definitely make you stand out at your party!
Just pick your favorite color!
(The whole family can wear these chubby suits together! Just stay away from any fire… you don;t want to find out what happens….) 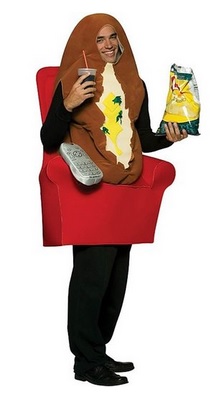 Be a proud couch potato next Halloween!
Off with the healthy snacks and baby carrots!
Off with the gym!
Bring the potato chips and soda!
Get lazy on your couch!
Life is short!
(Literally on your case……) 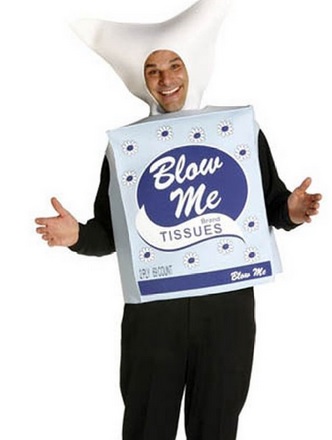 Blow Me Tissues Costume for Adults

Oh dear….
I hope you had your flu shot this year….
It’s gonna get very messy for you……

Hey, I’m not judging!
You probably have strong reasons for wanting to be a Kleenex Box next Halloween….
Hilarious!
(I just hope other folks don’t start blowing their snotty noses on you…. hahahahaa!)

The Most Ridiculous Costumes for Halloween Parties!

Well…well…well….
What have we here?
A happy, crazy banana costume for men! Lol
Hum…..
He is a proud banana I guess…
By the looks on his ‘banana’ face he is definitely ready to get the party started!

Do you love garden gnomes?
Then become one!
Just imagine how ridiculous you are going to look dressed as a garden gnome at your Halloween party! 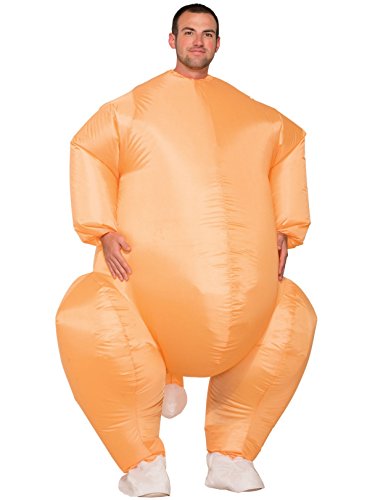 Hahahahahahahaa!!
This has got to be one of the most ridiculous adult costumes I have ever seen!
A funny cooked turkey costume!
Perfect for a Thanksgiving party or Halloween!
(Stay away from dinner tables though… Your color is perfect and you really look well-done!) 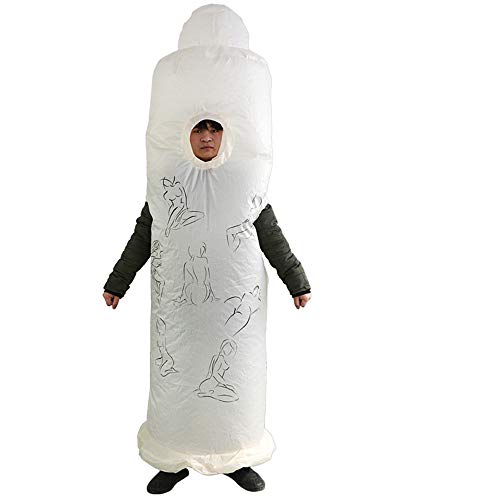 Omg!
How hilarious and ridiculous is this condom costume?
It’s awesome!
(If you are planning on looking absolutely ridiculous that is…)
Always be safe at parties! 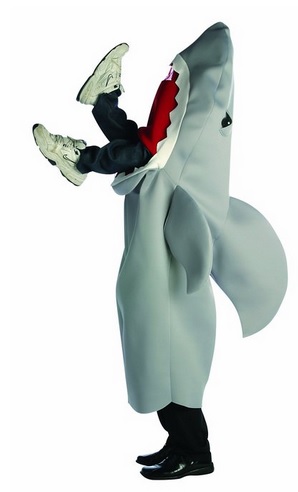 Oh no!
What a hungry shark!
And you are his dinner!

This is the perfect ridiculous costume for shy people!
Nobody is gonna see you!
You can look ridiculous all you want with this hilarious man-eating shark costume! 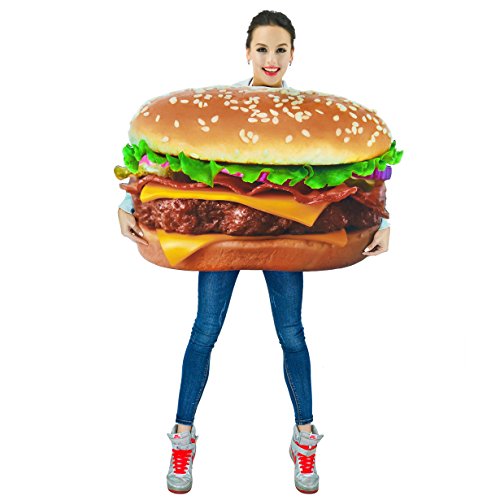 OMG…
I guess your love for fast food has gone a little too far…
You are way over your head!